You do know that the "holidays" are almost here

(sponsored post)
It should be unsurprising to anyone that has been here before that I am what is often referred to in the religious circles a lapsed catholic.  What this means is that I was raised, confirmed and married in the catholic tradition. My children were not only baptized catholic but have also done First Eucharist, Penance, and attended catholic schools...one still does. But I haven't willingly seen the inside of a church in years.

When I was growing up everyone was something, attending Sunday services at one of the 8 churches in our small town.. Catholic, Lutheran, Methodist or Baptist...everyone went somewhere.  Not being a christian was something we read about in english class (Diary of Anne Frank, Night...etc...), not being anything was unfathomable.

I grew up, moved away and met people who were not anything like those I grew up with.... and my eyes were opened and the way I think and the way I do things has changed.  One of the biggest changes I've made in my way of thinking happens every year when I send Christmas cards.  Before I wouldn't give a second thought to sending a card with a deeply religious message or one that included scripture, things have changed.

My initial reaction was to avoid the whole thing and stop sending cards...then I started sending funny card or cards with snowmen and nothing that could be remotely connected to any religion or set of beliefs...today I like to send photo cards that I can easily make and personalize with a warm message.

And this is where Shutterfly comes in... 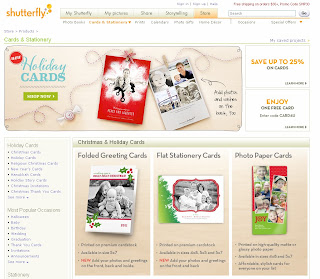 When I was approached by Shutterfly to blog about their holiday cards & products it was an easy answer; it's a product I use, like, and happily endorse.  This time of year you will find me searching through the stacks of photos I've uploaded along the way and those I've finally released from the camera card on a mission to find the best of the best for the Infamous (in my mind) Motorcycle Holiday Greeting.  Best part is, I can get them from Shutterfly with my own personal, not religiously affiliated message. Yipee.

I have a few favorites this year, and if you know me in real life & are on the Infamous (in my mind) Motorcycle Holiday Card mailing list please act surprised when this years selection makes it's way to your mailbox.

Colorful Warm Wishes - A cute idea if you live in a northern climate (like me!)

Holly Year - A nice idea if you have a lot of news but aren't into the annual letter (Me Too!)

I don't usually stop with cards from Shutterfly, I have made & ordered a ton of photo books a great gift for the relative that has everything but enough pictures of their families.

A suggestion for those of you looking at a graduation party in the near future a couple of these featuring the graduate through the years are awesome at the party in place of the standard photo board - and then you can send the extra home with special friends & relatives (be sure to save 1 for you & 1 for the graduate!)

The Nice Folks at Shutterfly have given me 3 codes for 25 free cards!  Comment on this post before Friday November 11th to enter (1 per person/email please) and I'll draw 3 names from the magic hat so you too can have Shutterfly fun. Standard Contest Rules can be found HERE!

***As a reviewer I am occasionally given things (for free) to try out so I can impart my opinion about them, this would be one of those times.  In exchange for telling you about (my real life love & usage of) Shutterfuly I received a code for my own 2011-2012 Holiday cards.
Posted by Cursing Mama at 1:07 PM

I've already designed my card for this year on Shutterfly - just haven't pulled the trigger and ordered yet. This would be AWESOMESAUCE! Love them.

wow! awesome contest! Thank you so much.

I'd have to get a photo of all the kids together! That would be a neat trick.

What is this strange and mystical place you've sent me to CursingMama?

As I'm sure many of you know I've been pretty busy reading and reviewing over the last several months and it has become time to have a place to keep all of those separately from everything else. Why? My association with Blogher (a great organization) requires that my compensation for reviews not exceed a certain dollar threshold; although this rarely happens with books, it can and I want to respect the contract I have with BlogHer. So, from now on I'll post the beginning of my reviews at CursingMama and give you the full low down over here.

And Books aren't the only things you're going to see reviewed here...

Cursing Mama
When not consumed with running her vast internet empire CursingMama can be found splitting her time between the things she enjoys and the things she has to do. Married for nearly half her very young life, with two children who appear to be nearly full grown but behave as though they've just flung from the womb CursingMama is lucky to find the time to hold down a full time job in the fast paced & exciting widget Industry. If she does find a minute to spare she'll spend it reading, driving fast, dabbling in a wide array of hobbies, perfecting her margarita ordering technique, and planning the next great household redecoration project. All at the same time. This is the story of my life as I try to make it to the finish without doing too much damage, hopefully there are chocolate chip cookies at the end.